I am the marginally disappointed owner of a brand new iPod. For a few weeks now, the ol' girl has been giving me the No-Folder salute, complete with the whirr-click sound of impending disaster. After a few victorious battles after which I was able to squeeze a few more day's worth of song-skipping and lags while I furiously backed up as many files as I could, she signed off Friday afternoon and never came back on. The sparks of life were there, but the diagnosis was terminal. I took her into the Apple Store last night.

I find it a tad presumptuous that the fellow whose assistance at the Apple store consisted of little more than listening to my tale of woe, concluding that my iPod does not turn on, and going in the back to get me a new one earns him the job title of "Genius." Nevertheless, at the Genius Bar I sat, hoping against hope that this Genius could salvage the 15 gigabytes of music I had worked so long to compile. He could not, but did lend the appropriate amount of sympathy, peppered with what I'm certain are well-worn jokes of the trade, such as "it's what's on the inside that counts" and "say hello to your new little friend."

The recovery project is well underway. I've got 4gigs back. It should be easier this time, I hope. I purchased an additional year of warranty just in case. I figure adding $60 to the original cost of my ipod, divided by 2, and I still have a pretty good deal going.

This is the back of my freshly-opened Raisin Bran box: 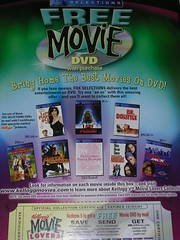 Let's take a closer look, shall we?