Picture it: Arlington. 2000. A young upstart of 22 years moves into her first solo apartment. Having shared houses and other apartments with roommates since her post-college emancipation, she is left with few furnishings aside from a bed and a TV. While it made for a smooth and easy move, there wasn't much to sit on in this new place she called her own.

A gracious gentleman, known to most of you as

frockazulu, enters with a calm demeanor and an outstretched hand. And in that hand, and his truck, is a spare futon. It's in good enough shape, but he warns it may not hold up for long since his "big ol' fat cousin been sleepin' on it". Not only does Frock deliver the futon, but assembles it, and even tosses a handy little wrench in for good luck.

That futon held up for six good years. Sure Frock's cousin bent the bottom rungs a bit, but it made for a more comfortable sit. Many a guest spent a drunken night on it. It was the best place in the apartment to sit and watch TV. Then one of the rungs gave way. No problem; all the better for an ass groove. The second made the gap too big, and plywood was laid down.

Then it became clear. A young success story now with 6 more years of experience should not be sitting on a futon held together with bungee cords and plywood. It was time to retire the futon and graduate into the world of legitimate furniture. Off she went to the local furniture purveyors and found just the couch she wanted. On the day of its delivery, she dismantled the old futon with the wrench Frock gave her and a salute. It's been a good run, she thought, it's been an honor to have you. 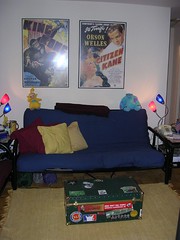 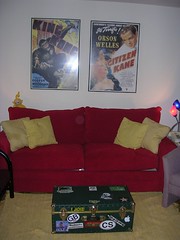