This weekend, the new fella and I (fans of the poll know him as our recent question-submitting guest) went to Natural Bridge, VA. After lamenting the dearth of ridiculous giant dinosaur statues and appliance-shaped buildings on the east coast, we stumbled across Roadside America, and learned Natural Bridge is a concentrated dumping ground for just the kind of bizarre crap we were looking for. Needless to say, it did not disappoint. 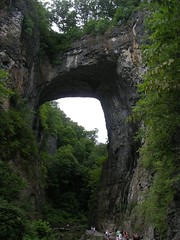 Most of the wonders of the area are the responsibility of Certified Genuis and Authentic Wacko Mark Cline, a master sculptor in the medium of fiberglass. We had done our reading and had a list of places to check out, but figured we'd stop and see the most standard "attraction" in Natural Bridge, the Natural Bridge. 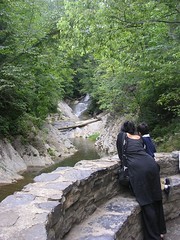 While breathtaking and serene, the wonders of the Natural Bridge were not limited to the unfathomable quality to its very existence. Yes, those specks at the bottom right are people. This sucker was huge, and one of those things that makes you blurt out corny statements like "ok this is amazing to look at now, but imagine coming down this river in a canoe 300 years ago and just finding...this". Dotted along the path were men dressed in vaguely colonial-frontier garb willing to point out the spot where George Washington vandalized the bridge, and the rock formation that looks somewhat like a buddha.

The site also included caves, an underground river, a replica of an Indian village, and a beautiful waterfall. Not photographed: approximately 4 feet to the left of the child in the photo on the right, an the impressively enormous human turd that had been carefully deposited no more than 3 hours prior by our uneducated guess. Nobody else seemed to notice it. 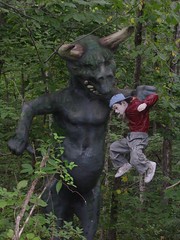 Which we quickly realized was a running theme in Natural Bridge. The place is so unspoiled by the mundane that the locals seemed immune to the extraordinary. As we walked up the hill to Professor Cline's Haunted Monster Museum and Dinosaur Kingdom we passed a family of three: the mother was wearing a leopard-print leotard with a fanny pack smoking 100's. The father had black jeans, a cowboy hat, and a Captain America belt buckle. The son seemed to be dressed mostly normally for a 12 year-old boy, aside from the Confederate Cavalry cap.

Our marvel was short lived, as just off the path was this sculpture of a demon and a child. At first it seemed creepy enough; the child didn't look too scared, and as far as demons go, this one didn't really seem all that ferocious. He doesn't even have claws. Then it dawned on us: what's he planning on doing with that thumb?