Day two began with a missed opportunity to have breakfast food for breakfast, but not for the lack of effort. Acknowledging that it was in fact 11:10 and breakfast ended at 11, I asked our waiter if he'd ask the cook to fry up an egg or two for me. This was met with a confused refusal on the grounds of the cook "lookin at [him] like he was a retard".

The Fancy Hill Restaurant in Fancy Hill, VA was no exception to the earlier mention of this bizarre place being home to a population of effortlessly bizarre people. Behind us, a mother sat on the same side of the booth as her young son in order to contain him at the table. The boy, in turn, proposed to her at least four times. Across the restaurant sat a family consisting of a bespectacled blonde, her Hispanic husband, their four children, and her father. She explained gently and carefully to her father and husband what "nachos" are, came to her father's aid when he was confused by the cell phone, and artfully handled all interaction between her party and the waiter. She carried herself with the kind of pride one would feel when your loved ones are utterly dependent on both the volume of your knowledge and the wisdom with which you dispense it.

Our waiter was right to be concerned about having been perceived as a retard. These three tables overwhelmed him. 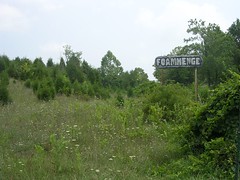 We saved Foamhenge for Sunday, to allow us a final savor of the absurd. When we pulled up to the path, the gate was closed and chained. Fearful of missing our opportunity, but respectful of the site, we called the number we had for Foamhenge, which happened to be the same number for the Natural Bridge, Dinosaur Kingdom, and the Haunted Museum. The human I was finally able to speak to seemed to have nearly forgotten about Foamhenge, was surprised that anyone was calling him asking about it, and didn't care in the least if we simply parked on the side of the road and jumped the gate. He probably would not have minded if I asked to drive through the gate. 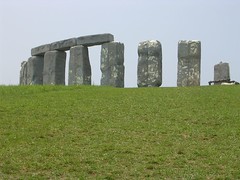 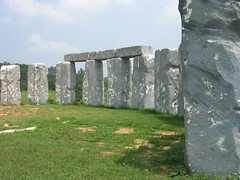 I have had the good fortune to have visited Stonehenge. I'll say it right now: Stonehenge is no Foamhenge. Standing among the foam monoliths was nothing short of spiritual. The contrast of natural beauty and genuine artificiality left nothing in the mind but the sound of one hand clapping. My heart swelled with patriotism. Foamhenge is American Awesome. Just when you think we lost it all to the Japanese, you find yourself standing in the inner circle of a styrofoam replica of Stonehenge surrounded by a field of wildflowers, gazing at the Blue Ridge Mountains in the horizon.