This weekend was highlighted by two Halloween parties and Saturday's 4-hour frantic search-and-creation of the requisite costumes. Evan had been kicking around the idea of going as Brock Samson for a while, but I was stumped. After searching through 2 party stores, 3 thrift stores, and a trip to Target that resulted in the purchasing of mere mundane items, I suddenly remembered a dress I had in my closet that looked pretty close to Dr. Girlfriend's "Charlene" disguise (

rahaeli may recognize it). Of course, taking an already obscure costume idea and narrowing it down to one episode made it so that only our friends knew what the hell I was, but we thought it was funny: 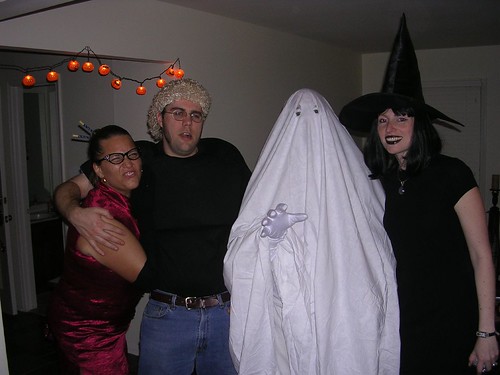 That's us with the Ghost of

soarjubs and the witch who married him.