Just to prove the majority (myself included) wrong, a wrapup of the New Year's Eve Ski Weekend. There was a bunch of hullabaloo building up to this, but long story short: Evan's old housemate came up with the idea back in September. Evan and I agreed to go, so did

soarjubs and his wife, and then the rest of the people going were mostly friends of the guy organizing or his fiancee. Due to some work scheduling foulups and a bedridden gnome, Evan had to back out, but since Sparky and K were still going, I was really excited to ski since I haven't been in years, I decided to go anyway. Things reheated when the issue of food purchasing came up, but by Friday, everything had settled.

I was one of the last people to arrive at the cabin on Friday evening at about 7pm. It would have been 6:30 and an even 3-hour drive had either Google Maps or Mapquest had the wisdom to send me four exits further up the highway and down a secondary road rather than having me exit at the earliest possible place, winding me through miles of unnamed roads and omitting a turn or two. The house was awesome: five bedrooms, two with their own weird in-room bathrooms, a hot tub on the deck that wrapped the entire house, and we could actually see people skiing on the slopes from the backyard. The added bonus: the place was called Bear-inn-dipity and was covered with fantastically tacky bear-themed things, and each room had it's own theme (the Soarjubses and I stayed in the "fishing" room, complete with a wooden plaque of an M80 labeled "Redneck Fish Detector"). When I arrived, everyone was pretty well sauced, and most of Friday was a rocking good time.

Saturday morning we got up leisurely, had a big breakfast, showered, and headed over to the resort. When I say I hadn't skied in years, I mean I hadn't skied in twelve years. I'm guessing since early February of 1995. I still have the skis I got back then, and am pretty proud to say I can still wear all my old ski clothes, as bright-purple and rubber-sunglassy they may be. While I was waiting for everybody to get their rental equipment, I decided to try out a run on my own, and unable to find the bunny slope, headed to the top of the mountain for one of the beginner trails. 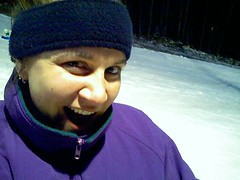 As soon as I clicked my boots into the bindings, it came back to me. I was moving around on the flat surfaces with the ease it took me years to build up as a teenager, I cruised right over to the lift, and getting on and off the chair was second nature. It was, as they say, like riding a bicycle. I skied down that first run like I had been skiing last week. Later I met back up with the group and two of the other people asked me to join them, but I was afraid I'd slow them down or get pressured. They assured me they wouldn't pressure me and weren't "speed junkies" so I went. I ended up skiing with them for the rest of the weekend, and turned out to be better than one of them. Either 12 years made me a better skier or I was better back then than I thought I was.

The weather wasn't great, and the ski conditions weren't fantastic, but I'd say I got in about 12 hours total. It's been very warm and there were a lot of dirty patches, not much snow, and not many open trails, but it was amazing. I can't even begin to describe how much fun I had, how happy I am that I decided to go even though Evan couldn't, and how happy I am just the other day he and I agreed to go on another trip with

turkishturki, my brother and co. in just a few weeks.

There was also some bullshit about this one guy making the dumbass call to invite his 19-year-old friend along with him, the kid getting very amateurishly drunk, us realizing the dangers of having this kid in the cabin of us from buzzkill to liability, and booting him out Survivor-style on Saturday morning, but that seemed to work itself out well enough and the good outweighed it for sure.

If only I could ever sum up anything in less than 500 words maybe I'd make more real posts. Brevity is the soul of wit.
Collapse