You guys really crushed it this week. Looking at the bars, I was psyching myself up for a whole mess of perfect scores. On closer inspection, the carnage didn't turn out so terribly. With that, ( Collapse )

In first place, showing she knows a jolly lot about the fire water,

poooplord makes her winners' circle debut with 12/13!
Raise your pints and toke your peace pipes for

popespydie who come in second with 11/13!
They're no Budweiser, but they'll do! In 3rd place,

And since I appear to be the only sucker alive actually at work today, This or That will appear tomorrow morning.

Yesterday we moved the last bits of Evan's stuff from his house to mine. Anyone who has ever moved anywhere can relate to the overall course of the day: in my mind, all that was left was his bed and a handful of random things here and there, so while he's packing up the last little stuff, I'll clean the bathroom, we'll vacuum, and it'll be ready to rock and roll. Two hours, three max.

Yeah. As is always the case, there were WAY more last few random things than I remembered, and the reason why they weren't yet moved is because they were either a pain in the ass or probably should not have made the "keep" cut after all. Like every other move I've been involved with, by the end we were just tossing things into loosely categorized trash bags. We had a U-Haul cargo van rented from 10-4. It got dropped off in the night deposit at 7:30.

Contributing to but certainly not the sole cause of the extra long moving day was situation at the U-Haul rental place that morning. We arrived shortly before 10am to find this: 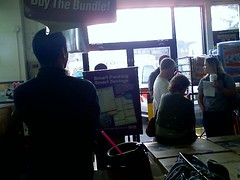 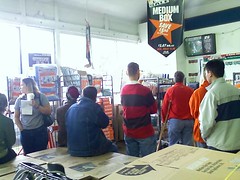 Apparently someone either called in sick or just didn't show up at all. We were, if I recall correctly, about 14th in line. During the time spent in line, I realized I was going through a range of emotions, similar to the stages of grief.

When I first opened the door and took in the scene, I felt the first stage, Annoyance. I was annoyed with the lone cashier for being such an incompetent dipshit for working so slowly as to allow such a long line to build up. When I learned it was not his nor U-Haul's fault he was alone behind the counter, I grew annoyed with the men milling around outside wondering whether or not they actually worked there and if so why were they just standing around. Then I became annoyed at the people ahead of me in line who were laughing about the situation (I learned later they were simply at a subsequent stage).

Fifteen minutes into the wait, I reached the second stage, Rage. I began composing complex fantasies about the shortcomings of my fellow linemembers, and practicing exactly how I would verbally castrate the cashier when I did reach the front of the line. Realizing I was entering the Rage stage, I offered to get snacks and drinks for us from the Dunkin Donuts across the street, where my Rage was sustained upon finding an excessively long line and equally incompetent cashiers.

I had called Evan while I was at Dunkin Donuts and he said a second cashier had arrived so things were looking up. When I got back, the line was unchanged, and I reached the third stage, Defeat. One of our line friends asked me what sort of compensation I thought we would receive and I explained to her that if places like this properly made up for the inconveniences they inflict upon their customers, they would go out of business, and that if she wanted to give the guy a piece of her mind, don't expect any result but to only do it for the fun of it. With the comfort of the food and the relief that at least it wasn't as bad as the guy who waited an hour to find out he was at the wrong location, I realized there was nothing else that could be done but to shut out all external stimuli, focus on my boyfriend, my coffee, and my egg & cheese.

Refueled and caffeinated, I noticed the rack of skull-shaped tow hitch covers and entered the fourth stage, Punchy. I realized then that the people I was annoyed with earlier because they were joking that being "almost next" in a line like this is similar to saying tomorrow is "almost next". Evan and I spent a good amount of time deconstructing the photograph of the woman wearing shoulder pads and hair wings loading the nice U-Haul storage box on her desk next to her word processor. I began pix messaging friends and relatives, and joking with my linefriends.

Conveniently enough, I entered the fifth and final stage, Antsy, right around when our turn came up. Had we spent much more time there, I would have began rearranging and straightening the inventory of packing supplies, but fortunately we had our van before I could do much else but review my to-do list a few times and make some walks over to the trash can. 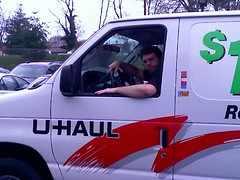