In the second consecutive day in what I hope will become a new trend of actual posting, I have more tales of Las Vegas for you, complete with photos. I guess it's more of an explanation of the photos than an actual tale, but this should be fun nevertheless. 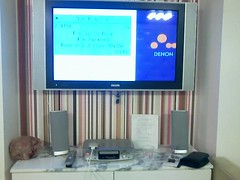 Our convention was at the Flamingo, which when I heard that, expected to be in a dingy throwback hotel whose charm would definately wear thin after a few days. The place must have recently come under new management, and they're doing their best to turn the image around. Evidence? My room. Granted, they're only halfway through renovating the rooms, so some of my co-workers were not priveleged with the ameneties I was so lucky to enjoy.

Item the first: the iPod TV. On top of the dresser was this little DVD player/stereo/cable reciever thing that among the list of instructions next to it was how to plug your iPod into it to play through the TV. The display from your iPod would show on the TV and you could pause and scroll through songs with the remote. There's mine, playing a Walkmen song (I think). Unfortunately my remote didn't work very well and all I could do was the allpod shuffle, but it did the trickerooni. 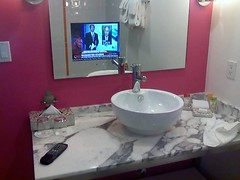 Next was the killer bathroom. That's not a reflection of a television; they actually had a plasma TV built into the bathroom mirror, properly situated for toilet, tub, and shower viewing. I'm also a sucker for those awesome sinks that look like bowls on top of the counter, so extra points there. Not photographed: the waist-level jets in the shower ala that commercial where the couple who doesn't have sex anymore races to take the first shower.