Evan and I saw 28 Weeks Later this weekend. I'm getting a little tired of zombie movies personifying zombies (or zombie-like infection movies for you nitpicking dorkbags out there--save us the comment please). In 28 Weeks Later, the Zombie Begbie spends the entire movie chasing down his children. In 28 Days Later, the Infected bit and vomited upon anyone they could sense. They consumed family and stranger with the same lust for blood, neither preferring, nor to the dismay of the survivors, discriminating between the two.

I hate to bring up the Day of the Dead remake, but seriously, zombies feeling sorry for other zombies, empathizing with the disadvantaged humans and then seeking out and killing the head of the rich people? Please.

Then we have the morality tale, as all zombie movies must have, and if you can possibly believe it, it's Anti-War/Anti-U.S. Army.

I promised last week I'd make proper entries for the cruise. Well, you see, sometimes people get paranoid at work and have to spend a few days looking busy and important after taking a week's vacation. I'll be posting a few pics below, but if you'd like to look at the soon-to-be entire set, it's on my Flickr page. 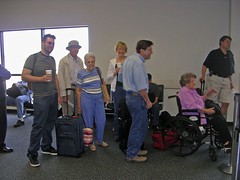 This trip was pretty much a family event that I got to tag along on. We had a total of nine people in our group: us, Evan's mom and stepfather, his maternal grandparents, his stepfather's mother, and his stepfather's brother and his wife. We flew out to Seattle the day before the cruise given the time it takes to get across the country, the time it takes to get grandparent-types through assorted processes, and to allow plenty of room for error. I had never been to Seattle before and (with apologies to Seattleites) I was pretty underwhelmed. It was a neat city in the sense that it looked very livable, sort of like a large small town, but I missed the whole chic west coast vibe. Perhaps it's because I spent 12 hours there in a party of octogenarians. 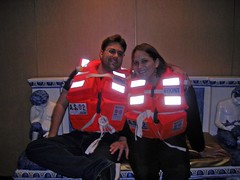 Saturday morning we boarded the ship, did all the requisite life vest drills and whatnot, and began exploring. Evan's stepfather put us in this sort of lottery program where we bought a bargain-basement room and could be upgraded if space became available in better rooms, but if not, we'd get what was paid for. We learned we had been moved from the 4th to the 7th deck, and hearing all the chatter around, the higher decks are the better ones.

Note to anyone looking to or ever considering taking a cruise: the higher decks may be where the suites and stuff are, but if you get seasick, or you just don't really like feeling like you're sleeping on a see-saw, try to get a room as low as possible and as far to the rear of the ship as possible. They say the bottom is where you feel the engine vibrations the most, but I'll take that over bobbing violently in the waves any day.

Anyhoo, we spent the rest of the day booking our massage appointment, had dinner with the folks, enjoyed a few delightful mojitos, and played a little blackjack. Off to a great start, so stay tuned.
Collapse