Since we have a conference going on, I worked a 14.5 hour day yesterday. This is the sort of day I have every day when I travel to conferences, but since the conference is in DC, I didn't have the luxury of sleeping in the hotel where this all took place. Having experience working conferences like this at my previous job, unfortunately I've proven myself competent enough to be one of the reliable ones who are asked to work these conferences even when they have nothing to do with my job or even my division because they can count on me to make sure things go well.

14.5 hours of standing or walking on hotel marble floors sends wracks of pain through your feet up your entire body. Recycled hotel air does horrible things for dehydration and dry skin. The constant barrage of questions and problems, combined with the abcence of sunlight, clocks, or any other means of determining what time it is addles your brain into this haze which allows you to forget the most rudimentary knowledge but retain things like Mr. Segal's 13 year-old daughter's name and how she was born on September 11 which really bums her out.

As a very wise person once told me, people who "get it" have a lot of trouble comprehending how other people don't get it. Working a convention is goddawful shit. But the concepts behind it are easy: keep your smile face on, treat everyone like a VIP, learn as much as you can about your surroundings and the event so if asked a question you don't look stupid. But most of all remember, we are all in this shit. You are not the only one suffering a difficult 14.5 hour day today. Nothing is going to be easy, and you will be asked to do things you weren't initially expecting to do, so remember the first three things and shut your crying mouth.

It is days like yesterday when I wish I could be that person who can never seem to learn how to do the things they'd rather not have to do, who blows off their responsibilities to take a nap or decides they'd rather not pitch in to solve the immediate emergency because they are scheduled to take a break in ten minutes. I am incapable of being that person, and therefore my reward is to make up for their shortcomings. As shitty as it is at times, I'm much happier that I get it.

Day 1 of the cruise was an "at sea" day. We slept in, met Hunky Dory at breakfast, and made the best of our Hydro Suite passes (the other awesome thing about the Hydro Suite pool is that you had to pay to get in, so we never shared it with more than four people). Our ship wasn't the only thing at sea that day, however: we were accompanied by a windstorm. According to the cruise info channel in our cabin, the swells were ranging from 7 to 12 feet. It was pretty neat being in the pool while the boat was rocking back and forth so violently—the pool was sunken into the floor about 3', so the water was sloshing around like a wave pool. Evan had begun to feel the ill effects of the rocking ship, which was eased a bit in the pool (the motion sickness movement/vision disconnect goes away when the brain says "oh yeah, we're in water") but after a while it got too intense. We took a nice long nap and went to dinner with the clan, tried to make it through a "Vegas-style" show but were again thwarted by the motion of the ocean, so we turned in early. 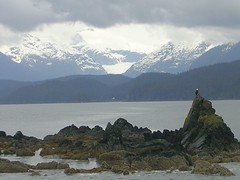 We arrived in Juneau, our first port of call on Day 2. It was one of the longer days we had in port, and we had a big shore excursion booked with the entire group: a whale watching boat ride, a trip to a glacier park, and closing out the night with a "salmon bake". The mostly-smooth catamaran ride during the whale watching was a welcome reprieve from the night's windstorm. The trip was full of wildlife spottings, including bald eagles (hard to believe they were ever endangered after a trip to Alaska – those suckers are EVERYWHERE), sea lions (which look like sausages on rocks from a distance but make this awesome moaning roar sound while they flop around), and as guaranteed by the tour company, whales. We had the good fortune of getting to see a group of three whales: a mother, a calf, and another female "escort", who were "breeching" in and out of the water, giving us a great show of tail flicks and water sprays. My camera, trying it's hardest with almost three-year-old technology, kept nearly missing all of the photo opportunities, resulting in two successes, if you can call them that. 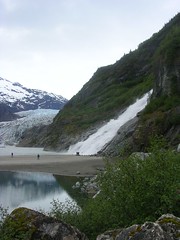 Next stop was the Mendenhall Glacier Park which, with the time and the stream-jumping ability, one could walk to less than 20' from a glacier. I think I can say this was my favorite part of the trip, and sadly we were only given an hour to spend there. Evan and I talked about how we would have happily spent only 2 hours on the whale watching tour and gotten another hour here, but considering the age and mobility limitations of most of our fellow passengers (and I assume a hearty chunk of the Alaska-cruising population), we could see how hiking across a mostly-dry riverbed might not be as appealing. 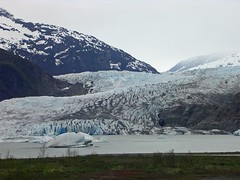 I was particularly struck by the magnitude of everything while walking around this place. The mountains, the glacier, the space between it all…it was just all so massive. I couldn't help but think about explorers or settlers (or PCs *) walking up to it or seeing it for the first time. The glacier had ripples of grey in the white, and spots where it was wiper-fluid blue. And, because I'm a super super dork, all I could think of was Jon Snow saying how some days it's grey or white and other days it shines bright blue. But seriously, if anything is the Wall, it's this. 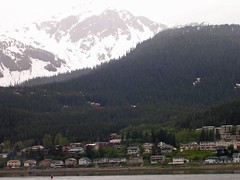 After we left the glacier and enjoyed the salmon bake, the rest of the group went back to the ship and we tooled around "downtown" Juneau for a while shopping and trying to find a hat I look stupid in (which is normally hard, but the omnipresence of fur made this one a slam dunk). The look of the town was really neat too. Big sky, snowcapped mountain, steep sloping hills of evergreens, and then pow, town. In a way it looked kind of like a child's drawing, or as if the houses were little figurines placed on a shelf. There was ice cream, also.