During the aforementioned Puzzle Quest break on Saturday night, Evan and I took advantage of the $25 gift certificate we purchased from Restaurant.com and went to Shula's, a steakhouse we knew nothing about. Based on the picutres and description at resaurant.com, not to mention the wacky "open for lunch, closed in the afternoon, open for dinner" schedule, I figured it was a mom & pop hole-in-the-wall kind of place. Shortly before we left, we visited their actual website, where we discovered it's in fact a chain restaurant, named after some football coach. We also noticed the difference in the interior photos between the two sites and figured even though it's a football coach chain restaurant, maybe we should dress up a little.:

We arrive, and as the hostess is leads us to our table, she stops at a glass curio cabinet and pulls out a painted football on a tee, setting it on my plate as we sit down. I look around and notice there's a football at each table, but no rhyme or reason as to who at the table has it. My first guess is that it has something to do with a prize or some other such gimmick. The hostess points out that the "a la carte menu" (which apparently is French for the list of entrees) is painted on the football, and that we'd get the dinner presentation and another menu from the waiter shortly. My next guess on the football is that it's the menu for the lady or guest, as it has no prices listed on it, and figure the second menu will have the prices on it for Evan.

The first sign that our $25 gift certificate wasn't going to go far was the wine list. There was a good variety of wines, but not a very good variety of prices, with just a handful of bottles under $70. Happy, our waiter, takes our wine order and gives us the other menu, this one featuring cocktails, appetizers, soups, salads, sides and desserts. The list of entrees is provided again, but still without prices listed. Shortly after the wine arrives, a different waiter pushes a cart up to our table and shows us the different steaks available, describing each one, and referring to the football for other nonsteak choices.

Happy returns and asks if we have any questions about the menu. We do: may we have a menu that lists the prices of the entrees? Surprised and nervous, Happy asks us quietly which one we wanted to know the price of, and we say we'd like to hear them all. He goes down the list, starting with the $96 Shula's 48 oz. Special and the $49 filet, pausing expectantly between each hoping we'll put him out of the horrible embarrassment of having to announce the steak prices to this table of cheap rubes.

I am not unfamiliar with the exorbitant price of a good steak at a fine restaurant; however, even for a 12.oz cut, $49 for a filet mignon seems a bit steep to me, especially at a chain restaurant in the lobby of a suburban Marriott hotel whose menu is written on a pigskin.

The meal was fine though; it wasn't the best steak I've ever eaten, but it was pretty good. The chairs were too big for the table - more like wing chairs - making it seem like we were sitting 5' apart from each other. The service was attentive, but strangely all of their desserts take 25 minutes to make. We were warned that the souflee would take that long so if we wanted it we'd have to order it with our entrees. At the end of the meal, we decided to go nuts and have a dessert anyway, ordered the chocolate lava cake, and discovered that it would take 25 mintues also. We figured what the hell we can wait, but it was sold out so we opted against dessert after all.

The conditions of our gift certificate were that we buy either 2 entrees or spend $35 (lolz), and an 18% gratuity would be added to the bill. Our $25 gift certificate almost covered the tip.

The coolest part of the entire experience, however, came as we were leaving. Next to the mints was a big bowl of these: 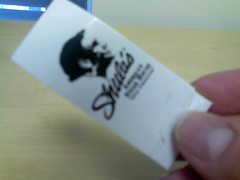